“Innocent” Flirting May Be Venomous to Teenage Girls 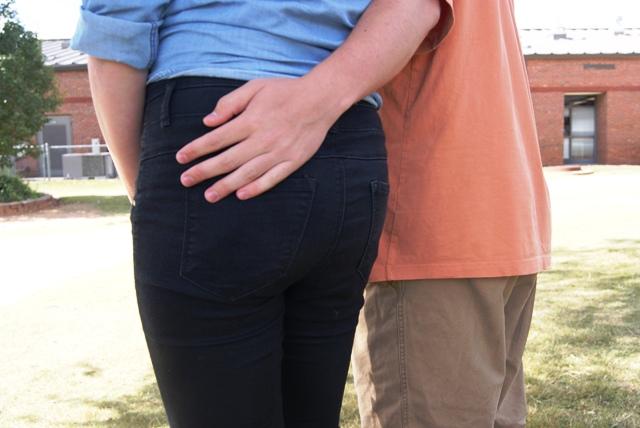 Hands to yourself, boys. No matter your relationship to someone (whether they be a stranger or your girlfriend) doesn’t mean you have any right to touch her body without consent.

The male opinion influences women’s decisions: the way they dress, the way they speak, the way they hold themselves. Sometimes, a man’s opinion is so violent that it can completely destroy a young girl’s self-confidence. I am sure there have been multiple articles such as, “20 Things Women Should Never, Ever Do,” which offer the advice to “never contradict your man – in public” and which give critique on what women should and shouldn’t wear for fear of judgment from men, as if women’s wardrobes should depend entirely on a man’s opinion, as if women are their own personal dolls to dress up and play with, as if women exist for objectification. The people who are most affected by the constant objectification are teenage girls. The teenage girls who are growing up with the ideology that they cannot wear their tank tops because it is their fault boys look at them, the teenage girls who fear wearing shorts because they do not want to be seen as promiscuous, the teenage girls who are taught that their bodies do not belong to them but to the men around them who are free to touch and look at them—they are the ones who suffer. Because of this ideology, young women have developed a warped idea of what respectful flirting actually is.

I was raised on the idea that men’s lusting after women is romantic. I was raised on the idea that a man who ignored my refusals for a date and persisted continually with the disguise of kindness in flowers and chocolates is romantic rather than the harassment it is. Many girls do not sense the condescension in the patronizing terms “sweetie” and “princess”; I would much prefer to be called “Dragon Queen” if it meant I could engulf men who behave this way in flames and watch them burn. When men stare at a woman’s behind or chest, girls are expected to see it as a form of flattery, and a slap on the behind is just another way that a man can show his affection, right? We let this happen, because we, as a society, are trained to believe that it is okay. It is not. Whenever a man calls out across the street to a young woman, it is a sign of objectification, no matter how much it is said that it is “just a compliment!” The man’s goal is not to make the woman feel good about herself; if he wanted that, he could’ve figured out that screaming across the street to her was not the best route. As Jenny Block, writer for the Huffington Post, says in her article, “They [men] want your existence to be about them. You exist for them. Your beauty is for their consumption, to appease their desire.” To them, women are nothing but objects. Women should not be validated by catcalls, because it is not validation. It is a type of devaluation that demotes women as “nothing more than a shiny thing to look at.”

Many men think that contact gestures of affection are flattering to women.  In presuming that touching in all forms is perfectly okay, they are also presuming a woman’s body is theirs: theirs to touch, theirs to grasp and hold, even if women are not comfortable with the very personal contact. The only thing worse than boys thinking it is okay to touch women freely is when girls think it is flattering. It teaches girls that they have no freedom to their bodies. When society supports the belief that smacking, pinching, or touching a woman’s body non-consensually is a form of flirtation, girls learn they have no right over their own bodies. Our media perpetuates the skewed idea that it is a man’s goal to have success and it is a woman’s goal to marry a successful man. We cannot just keep saying that it is society who is making this happen; we cannot distance ourselves from the injustice and inequality. We are society, thus we must change.