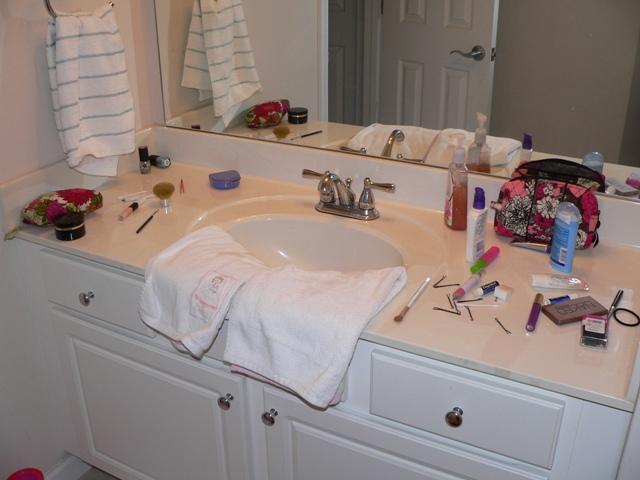 Bathrooms turn into a hectic wasteland after a morning of pure craziness.

“You’re such a loser!  I can not believe I was your friend for so long!” Jessica shouted at Cadence across the hall.  Feeling low, discouraged, and ashamed, Cadence stared at Jessica with tears in her eyes.  She could feel the glares and snickers of the spectators as they watched on and did nothing to intervene.  Cadence promised herself she would never run away from a tough situation, but this on was just too drastic.  Walking fast down the corridor, one of Jessica’s friends stuck her foot out, tripping Cadence, and making her fall onto the cold ground.  Laughter and index fingers were directed toward Cadence as she fumbled for her fallen books.  Heads swam in circles and laughter increased, making it difficult for her to see clearly.

Cadence bolted upright in her bed, drenched in a cold sweat.  Breathing hard, she remembered her dream and the reality of the events that occurred.  Shaken and teary-eyed from her nightmare, Cadence climbed into her steaming shower, desperate to wash away the scars from the day before.  Before her shower was complete, the hot water stopped abruptly.  She screamed, grabbed her towel, and ran downstairs demanding to know why the water stopped running.

“Honey, screaming will help nothing.  Take a deep breath, and tell me the problem and maybe I can fix it.” Her father replied calmly to Cadence’s outbreak.

Cadence inhaled and exhaled, feeling the air fill and leave her lungs.  “Okay, while I was in the shower the water stopped running.  Luckily, I was almost done, but still…”

Cadence’s father is a school teacher and is used to dealing with needy children.  “I thought I told you the plumber was coming this morning, but I guess not.  Sorry about the mishap sweetie.  Hurry up and get ready.  It’s picture day at school.  I’m leaving for work now.  I love you sweetie.  Your mother would be proud of you for handling yesterday at school.”  His voice waivered mentioning her mother.

Her mother passed away from an unknown disease two years ago, when Cadence was 14, and the memory of her still tugs a string in her father’s heart.  Losing a loved one at such a young age is tough, but losing your mother is life changing.

Cadence is pulled from her thoughts as her dad places a slobbery kiss on her forehead, signaling he was off to another day of teaching.  “See you at dinner! Love you!” She yells as her father walked out the door.  She sulked up the stairs to her bedroom where she continued to get ready.  In the middle of straightening her head, she heard her doorbell chime and flew downstairs to open the door to let her elderly neighbor, Ms. Watson.

“Cadence, Mr. Whiskers bolted when I opened the garage to get the paper!  Will you please find him for me?  It would take me ages to circle this neighborhood.”  Ms. Watson breathed out.  The two-second walk to Cadence’s front porch must have tired the fragile woman.

“Sure thing Ms. Watson.  Do you remember which way she ran?” Cadence asked with a sigh.  Cadence followed the old woman’s finger where she pointed in the direction the cat ran.  She took off after him, wanting desperately just to find him so she could finish getting ready.

After an hour of searching, Cadence leaned against the sink and stared at her hair.  She began to re-straighten her frizzy hair.  She could never have imagined a more stressful morning.  Cadence had to get to school within thirty minutes, and she still hadn’t applied her makeup.  She grabbed her cosmetic bag and car keys wanting nothing more than to crawl back into her extremely cozy bed.

“Oh no… please do not die on me!” Cadence screamed into the steering wheel of her hand-me-down car.  Realizing she was stranded five miles from school, she called the towing company’s number her dad made her write down and keep in her glove department.  Fifteen minutes later, a tow truck pulled up beside Cadence’s parked car, ready to tow it away.  “Umm…Sir?  I realize you’re on a schedule, but I have to be at school in less than ten minutes, and I was wondering if you would give me a lift.” She nervously asked the large, bearded man.

“Sure thing.  Go ahead and climb in the truck, but first, can you put your car in neutral?”  The man told the shaking Cadence.

After shifting her car’s gear into neutral, she climbed into the tow truck, praying she can make it to school on time.  The tow truck driver tried to make small talk, but Cadence was too nervous to fully respond.  He finally resorted to turning on the radio and singing along to 80’s music.

Finally after what seemed like hours the tow truck had arrived at the high school.  The truck came to a stop and Cadence thanked the bearded man for towing her car and driving her to school.  As she was jumping down from the seat, she knocked a Styrofoam cup with her elbow, spilling coffee all down the front of her shirt and her thighs.  The coffee was cold, but coffee is coffee and it stains. “Oh my gosh…I…I’m so sorry!” Cadence stammered as she placed the cup upright.  Before she could do any more damage she ran into the school in search of a bathroom.  Finally finding a bathroom, Cadence had one minute until the bell would ring, so she furiously scrubbed her pants and sweater until most of the coffee had come out.

Breathing hard, Cadence sat down in her chemistry seat next to Jessica, the girl who humiliated her in front of everyone yesterday, and started taking notes to avoid talking to her.

“Hey, Cadence?  I am really sorry about yesterday; I guess I was mad about Johnny breaking up with me and took it out on you.  I won’t be upset if you can’t forgive me, I know I was wrong to yell at you.” Jessica said in a small voice.

“It’s okay…I do forgive you.  Maybe we can hang out this weekend to get your mind off of Johnny?” Cadence replied.

Cadence felt a rush of happiness as Jessica smiled and embraced her.  In that moment, Cadence realized that friends are important and without them you will just have one heck of a crazy morning.