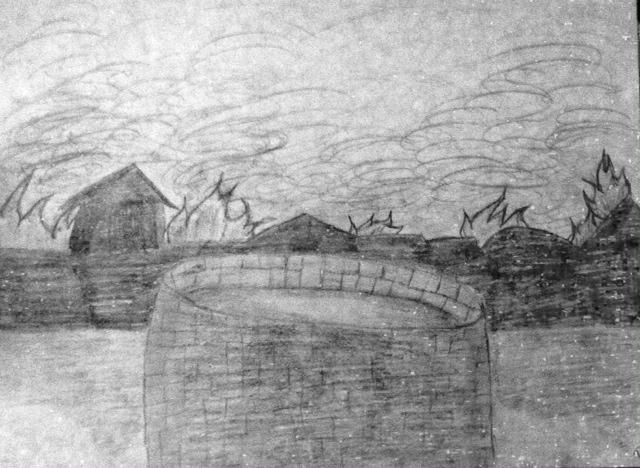 Hidden in plain sight, they waited; those monstrous beings that destroyed our town. Barely made it out with my life, I did. My friends, my family, my village destroyed.

“Grandpa, what happened to your town? Why do you live with ma and me now?” Haylie inquired, disrupting her grandfather’s reminiscence.

“Run! Hide!” Mass hysteria erupted in the calm marketplace. The crier had been overtaken by the troops disruptively marching into town. Dust blinded and suffocated the peasants attempting to save their own lives. Mothers screamed for their children lost in the fray. The marketplace was surrounded.

“Citizens, peace has been overturned. It no longer exists in this region. A vile tyrant has

consumed this portion of our country and intends to finish it all. Flee. By all means flee. But know this, you can never return to your homes again. Your village will be forever lost. Your people and customs will become scattered and eventually lost. There is no way to save yourselves except to flee… or to fight.” The man who spoke finished and signaled to his men to

“Who are you?” a brave soul hollered after the leaving squadron.

“Friends,” answered a lone voice among the mass.

Fazed and alarmed, the town gathered its leaders to a meeting. Hours upon hours spent

men were required to fight for the freedom of the people. Post-haste, a force was assembled. Defenses were built to surround the town. No one knew the sum of the oncoming forces. The strangers made it seem as if there was to be a great number, too large to imagine, coming to overtake the smallest, bleakest town in all the country.

For days they waited in fear. For weeks they anticipated. Every creak of the houses,

every whistle in the wind struck fear into the men. It seemed they would do anything to break the

monotony and anxiety. Cooped up, trapped in their homes, awaiting some distant threat, the men grew bored. Then they grew tired, weak, and ill. Water was beginning to run low. The only well was outside the barricades. Were they brave enough to dare to leave town unattended? One man was.

“Who was it, Grandpa?” Haylie interjected mid-story.

“It was me, darling. We drew straws to find out who would go fetch the water; I drew the

I gathered some supplies for the trek to the well. Setting out just before dawn was the best idea I could have had. I made it to the well by the breaking of dawn. They sent me out to the old wishing well, or so the old wives tale said. A harmless wish in a superstition never hurt anyone.

I just wish that this battle will be quick, and that the war isn’t long.

And with that, I filled up the jugs and began walking home just about the time the sun reached a point where it was in full view. And that is when I noticed the smoke rising from the village. Disregarding the water and my pack, I rushed back to the town. I had no other thought in

my mind but to save as I could. By the time I had reached the borders, all that was left was ash.

My second thought, after I had recovered myself, was to find the women and children and ensure their safety. The entire forest surrounding our village was scorched, as well. No one could have survived or escaped. There was no one but me and a lone rider out on the horizon.

The siege continued, and there was no authority to whom I could report the destruction. My town and my people were demolished. Though I never found the men who destroyed my

home, I suspect the “friends” who warned us were to blame. Starve and dehydrate us, then burn us to a crisp. Cruel, but effective.

Tears streaming down her face, she shook her head. Standing up, she crossed over to her grandfather and threw her arms around his neck.

“Do you miss your people, Grandpa?”

“More than you know, my dear. And it was all because of some dumb old well a few miles out of town.” Guilt still riddled his insides. Some silly superstition ruined his life.