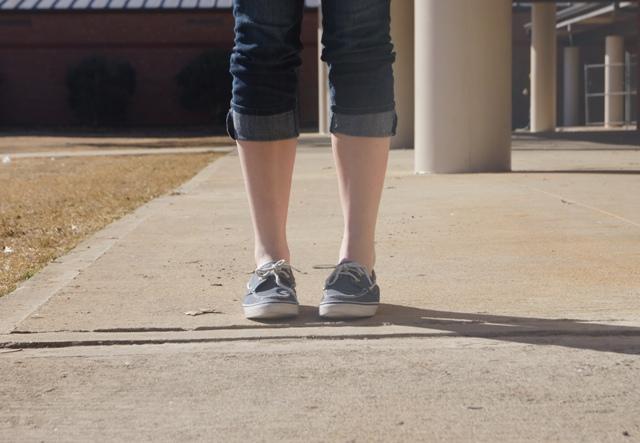 Maybe caught between salvation and damnation was right where she belonged, Delilah thought.

Delilah floated through the arched wooden doors. She paused and hovered at the top of the stairs, looking out toward a horizon that was obscured by buildings of various sizes.

“My lord,” she said, addressing the heavens above the buildings, “how beautiful you are.”

She danced down the concrete steps and onto the street, moving as though she were weightless – with each step leaving inches of space between the soles of her shoes and the pavement. A line of scripture made its way back into Delilah’s mind.

The heavens are the LORD’S: but the earth hath he given to the children of men.

The Rabbi’s closing words had surprised her. It was not exactly the words themselves, as the line of scripture was already vaguely familiar, but the way in which he said them. She remembered previous occasions where the Rabbi had quoted this text as an encouragement to the congregation, but this time he referenced it with a cautionary tone, as if they were a warning to the chosen people of god, a prayer for those who live among the children of men. She shrugged. Rabbi Bechai’s words had been ominous, but in her present condition she was floating several inches above the earth, separate from its mass and its inhabitants.

The October wind carried a cold that snuck through her black tights as she traveled toward her parents Chrysler minivan, chilling her legs to just above the knee where her plaid dress ended, swinging from side to side. Delilah passed over the curb and into the road where she pulled open the driver’s side door of the golden van. She got in.

The 7 year old engine sputtered to life, blowing a blast of frigid air out of the vents as it started. She scrambled to shift the knob on the dashboard to the defrost position, eventually succeeding in diverting the air away from where she sat, shivering. Waiting for the engine to warm up, she sat hunched over in the front seat with her hands squeezed between her thighs and her elbows pressed against her sides.

Her parents likely wouldn’t be awake when she got home, Delilah thought. They hadn’t been to temple in several months, but honored the Sabbath by sleeping until noon. She didn’t blame them. Her father managed a gas station every day, seeing daylight only through the two glass doors at the front of the store, and her mother began a teaching job with the elementary school at the beginning of this year. These circumstances made it rare, but, over the last year, the hands of God had sometimes guided the three of them into their house at the same time, an occasion celebrated with a humble meal, and, upon Delilah’s request, a reading from the Torah. She liked the thought that God’s hands were behind her, guiding her decisions and movements. She imagined that they were behind her now, as she drove past her father’s gas station.

The crash sent the tail end of the van swinging in a semi-circle arc, so that Delilah was facing the same direction she had come from moments before, but the road she now saw was obscured by white steam and a crumpled red pickup truck. The man in the driver’s seat was pushing against his half-inflated airbag.

The hands of God don’t slip, she thought incredulously.

The door swung open with push, and Delilah detached her seatbelt and rolled out of the lopsided van. The truck’s red door opened as well, revealing the driver who braced himself against it as he got out. He looked up at her.

She was suddenly very aware of the contact between her shoes and the pavement.

His eyes searched the space behind her, as if he didn’t quite see the trembling girl in front of him. When his eyes finally focused on hers, he didn’t seem alarmed.

“Are you hurt?” he asked, making his way toward her.

Delilah hadn’t considered it. She didn’t think so.

“I don’t think so,” she answered

His head was bleeding from a split an inch or so above his right eye. Delilah tried to mention it to him but found herself too weak to get the words out. He reached out a hand of support and guided her to the curb of the intersection.

The first time she got a real look at the driver was a week later. He appeared as if a computer program had combined every photograph of an American male and used mathematical formulas to generate a combined product. The result was a remarkably average-looking, middle-sized young man with brown hair. He was standing on Delilah’s porch.

“My parents aren’t home,” she started, but trailed off as she connected with his exceptionally dull eyes.

Now that they only had one car between the three of them, Delilah’s family had to compromise over its use. Delilah now rode the bus to school and had missed this morning’s prayers.

“That’s okay,” he said, “I came to apologize. If you ever need anything – a ride anywhere – just give me a call.”

“I don’t have a phone.” Her hands were trembling. Was it fear? She felt like she had just broken a rule that she had never known existed.

“An email then,” he said, chuckling.

He reached into his back pocket and produced a scrap of paper and a blood-red gel pen. He extended his arms and clicked the pen, looking absurdly like a businessman presenting a contract.

“Just write your information down on the paper, and we can work something out. I know the wreck has been hard on your family,” he paused and accepted the paper that now held Delilah’s information, “I’m sorry,” he said, finally, and turned to leave.

Delilah watched as he walked off the porch and onto the sidewalk. The rabbi’s words came back to her in full force as she shut the door. Delilah thought about Eve. In an utterly human moment, Eve denied her eternity for the world. Had Delilah now done the same? She was left with a feeling that she was slowly slipping rank and file with the inhabitants of the earth, and the situation felt entirely out of her control. She shook her head and chastised herself for being so dramatic. All she had done was write an email address on a piece of paper for a young man, a terrifyingly plain young man, who was just trying to apologize. Nevertheless, that night, Delilah lay on her bed with her hands clasped together on her stomach, begging for forgiveness. What she wanted to be forgiven for, however, she didn’t quite know yet.
……………..

The next week went by in a somewhat usual fashion. Missing temple on Saturday left her feeling alienated in a sea of her own brothers and sisters: she spent the week feeling like she was caught in a limbo between salvation and damnation. She told herself, again, to not be so dramatic.

On Wednesday, Delilah returned an email and accepted a favor. She was tired of walking on solid ground.

The car pulled up onto the side of the street in front of her house on Saturday morning. Delilah watched him push the horn once. She returned the curtain back to its closed position and opened the front door. It was early, and she wasn’t worried that she would be late. He reached across the center console and shoved open the passenger side door to let her in.

“Do you like it?” he asked, once she had fastened her seatbelt, “It’s a rental.”

It was a silver 2003 Honda Accord. She almost laughed at how plain it was.

“It’s great,” she replied, staring out the window.

They rode in silence for a while.

“So, you’re religious,” he said, but he phrased it more like a question than a statement.

“I’m just trying to love God,” she said, almost desperately. She felt like crying, and wanted nothing more than to be in the sanctuary of the temple, speaking in Hebrew as the rabbi sang the morning prayers. Over the past few days, she felt like it was the only place she would be safe from the world.

“What do you believe in?” Delilah asked after several moments of riding in silence.

He paused for a moment. Delilah turned away from the window to look at him; the silence had made her curious.

“The airbags,” he settled on eventually. “And the crash test ratings, and the road workers, and the stoplights. And the doctors.” He chuckled, pointing towards the stitches above his left eye.

“Your God wears hardhats and stethoscopes!” Delilah exclaimed, laughing. She had turned in her seat so that she was facing him.

“And yours wears a Yamaka.” He smiled.

A smile played at Delilah’s lips. In a subtle, almost imperceptible way, the terror that she had felt a week ago had changed, and the drop in her stomach that she got from spiraling down from heaven was slowly being transformed into the anticipation of a change imminent.

He pulled into the spot where she had parked her parents’ golden minivan just two weeks ago.
……………..
Delilah didn’t speak any Hebrew during the sermon, nor did she sing along as the Rabbi called prayers. Her prayer book lay open in her lap as she thought of the man waiting for her on the street outside.
Delilah walked through the arched wooden doors. She paused and stood at the top of the stairs, looking out toward a horizon that was obscured by buildings of various sizes.

Maybe caught between salvation and damnation was right where she belonged, Delilah thought.

“My lord,” she said, addressing the buildings and all that lay beneath them, “how beautiful you are.”