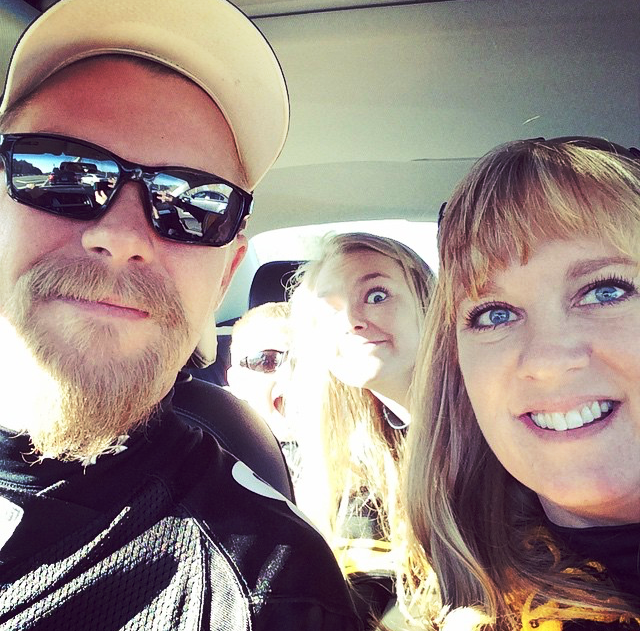 This is my family when we drove to the Georgia dome to watch a football game shortly after her heart attack. On the right, my mom is holding the camera, and my dad and brother are on the left side.

The slight tickle of dust floating around my nose encouraged a soft sneezing feeling. My eyes cannot help but flutter open to see such a motionless atmosphere. It seemed as if the world had paused. I was too afraid to disturb the stillness of the moment, so I remained tranquil. My limbs refused to move even a millimeter. My brain started to scream “GET UP” with no response. Why? What is happening? Then, sudden images of the night before flooded my mind. A familiar sinking feeling overcame me. My neck managed to angle itself so my eyes could just barely read the time on my clock: 9:04 a.m. Thoughts of the night before flood my mind.

“Hey I’m taking mom to the hospital. Kayla will be here soon. Go back to sleep. It’s midnight. Everything will be okay.” My distraught father reassured. At the time, I was so tired that I did not realize how much his hands were trembling.

His seemingly calm but shaky voice seeped into my thoughts. Then I remembered: It was Friday, and I had school. An overpowering feeling of depression and anxiety took over, and I checked my phone. Dad would have woken me up for school if everything were okay, so I shot a text to dad. “Hey, how did everything go last night?”  After five minutes of me staring at my phone, Dad walked in slowly. Deep blue bags circled his bloodshot eyes. His matted hair stuck up in one area, but he didn’t seem to care. My brother followed him into my room with still, tired eyes. I started sobbing before his mouth even opens; I knew what he’s going to say, but I was not ready to hear the words.

“Guys I’m so sorry. Last night, I took mom to the hospital…” his throat caught as his eyes started to water. My whole world fell apart. A boulder crushed my chest, cutting off my breathing, but my brain was too stunned to tell my lungs to inhale. The lights appeared to dim, and my eyes blur. Nothing really mattered anymore. I did not care about anything, because I was too occupied with my broken heart crushed by grief. One of the people I loved most, gone.

“But,” he said, “She is in ICU, they have a pump on her heart. She will be okay.” My lungs gasped, and my tears poured like faucets out of relief.

On October 24 at 12:02 a.m. my dad rushed my mom to the hospital for chest pains. As soon as they arrived at the hospital, my mom began to have a heart attack. Panicked, my dad called for help until several nurses and doctors flooded the parking lot, asking what was wrong. The team of doctors quickly maneuvered her onto a stretcher to perform CPR in attempt to revive her. Soon enough, they took her into the ICU to be hooked up to several machines with tubes protruding every side, ending inside my mother’s arms and mouth. The doctors found that the cause of the heart attack was a blocked coronary artery, and they used a stent to keep her artery walls open, in order to prevent any more clots. She required a ventilator to breathe and a machine to pump her heart for her. When someone’s body is put through that much stress, it needs to rest, so they sedated her over a period of four days and induced hypothermia in efforts to keep the swelling down and reduce inflammation.

It was the third day of sedation when I finally broke down. That was the first day I actually accepted what was happening. Throughout the whole week, I had been avoiding everyone. Whether it was my own dad or a family friend trying to hug me, I didn’t want anything to do with them, because accepting the sympathy meant accepting the situation; denial had worked for me.

The house was empty, and my music was blaring. A familiar song was blasting through the living room as I was standing next to the balcony upstairs, looking down on the couch in the living room. Only a few steps later, I stood at the top of the stairs found myself suddenly thinking about her. Sinking down to the old carpeted floor, my brain crumbled; suddenly, denial did not work anymore. My tears made it impossible to see, and I cried so hard my body was shaking. My brain searched and searched for an answer as to whether all of this was false or a dream, but my search came up dry.

I started shouting at God, begging not to take her. I was a mess. After screaming until my voice was hoarse, I grabbed my phone and texted everyone I thought of. So many people offered their prayers and comfort. My mind calmed down, and I decided to pray myself. The prayer must have lasted for hours, but after, I felt so much better. Now, I believed she would be okay.

After the last day of her sedation, everyone was anxious. Everyone but my sister, my brother, and I were there by her bedside. Even though I was still “just a kid,” I was furious that they would not let me see her. My sister, Allie, was driving me to the store to go shopping when we received a text from our dad. (There was a large group message that my dad sent updates in for the family members that could not be there, including me.) The message popped up, and as I read the lengthy message, we both let out sighs of relief. Dad said that she woke up and recognized him. She was a little immobile because of the four day sedation and all the stress on her body, but the doctors promised it would wear off and suggested some physical therapy. My head felt like it was floating, and the endless ache in my temples had disappeared. A smile formed on my lips for the first time in days. My eyes skimmed over the message again, noting any information I missed. I sighed once more and sat the phone down. For a few minutes, I wondered what she looked like, and that is when the question popped into my mind.

“Can I see her now?” I asked, knowing the answer would be yes this time.

“I will talk to dad later.” My sister responded, much to my, but at least I knew my mom was okay.

The next day, I had finally been allowed to see her. I remember walking into the room as the aroma of antibacterial soap and hand sanitizer clouded the space. My eyes met a sickly woman in a hospital bed. Her eyelids switched from half-opened to closed a couple times before smiling.

“Hi mom.” I finally squeezed out. I walked over slowly to the side of her bed  to get a closer look. My strong mother looked up and smiled. All the muscles in my body relaxed like taking in a fresh breath after four days of holding it. After cracking jokes and laughing with a rough voice, she rolled over and fell asleep.

From what the doctors had told my sister and dad, I did not expect my mom to be home for a couple of weeks. Her body had to heal, and she had to be in bed and on multiple medications for a very long time to get back to her original state. That was why my jaw nearly touched the floor when I saw her stagger in the door with my dad that night. Walking, smiling, and laughing with a croaky voice, she stepped in and wobbled all the way to her bed.

“She’s back.” Jacob, my brother’s smile couldn’t have been any bigger as those two words left his lips. A sense of overwhelming joy came over me when I realized how lucky I was and how much she does for me every day; she was my miracle mom. Of course, my dad seemed even happier, if that was possible. Everything about him was glowing. He had quickly shuffled in the house behind her with ample amounts of balloons and flower bouquets. There was even a huge poster that everyone from her work signed. She was back, and life was resuming its former normality.

My mom is the strongest, most caring person I know that has always been by my side. She supports me in every decision I make, and she always gives the best advice. Her smile can brighten the whole room and never fails to make me smile. Her laugh is so contagious and magically turns a bad day into an amazing one. Every day, I thank God she’s still here, because I don’t know what I would do without her. My mom plays such an important role in our family and in my life. She just oozes confidence and happiness, touching everyone around her. She’s the kind of woman that I aspire to be like when I grow up, and I’m so lucky to call her my mother.