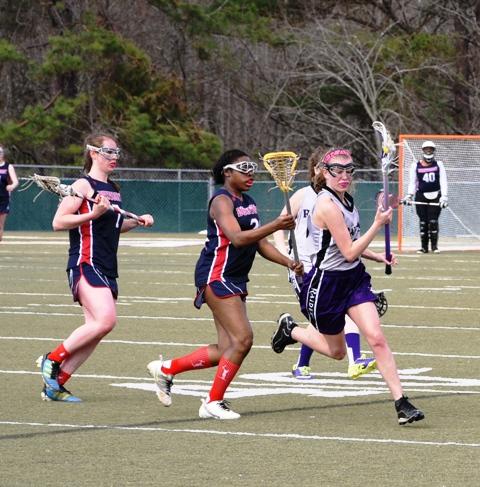 Senior Rachel Hejduk (#2) scoops up the ball and races towards the attack end of the field. Lady Raiders scored successfully nineteen times while they only gave up eight points.

The Lady Raider’s Girls Varsity Lacrosse team brought their first win this season to Raider Valley. They dominated the Dunwoody Wildcats on Saturday, March 21st. Senior Rachel Hejduk (#2) scored the first point within two minutes summed into a whopping seven goals during the game. Dunwoody’s defense and defensive midfielders, players who run the whole field and play both offense and defense, gave no competition to the Raider’s offense. By the end of the first half the score climbed to a frightening 9-3 with the Raiders in the lead. Also, Senior Jessica Will (#5) contributed four points and one assist to Junior Corrinne Thompson (#19) who successfully placed three points to the scoreboard. The team played an amazing game, and Sophomore Avery Finely (#15) put her first goal in the net this season as well as Sophomore Cora Wallace (#6), who scored two goals. The girls never eased up on Dunwoody and came out with a deafening victory of 19-8. Goalie Freshman Grace Hanks (#65) blocked shot after shot on the defensive end and saved the other team’s score from skyrocketing.

“This game was a definite beginning to a change in the girl’s lacrosse program here at North Forsyth. I hope to keep growing as a team and be able to win more and more throughout the season,” stated Coach Kienle, the head coach of the Girl’s Varsity team.