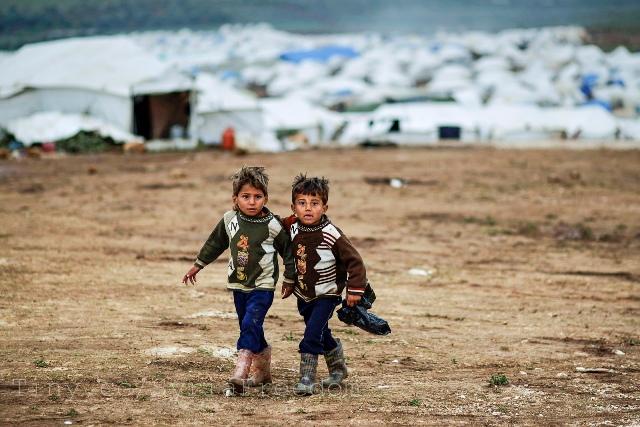 Two Syrian boys, who fled from home with their family, walk back to their tent in a refugee camp

In 2011, what began as peaceful protests against the Syrian government morphed into a full-out war.  Other countries jumped in, and soon Syria was entangled in a confused battle against terrorism, rebellion, governments, with shoddy alliances and a variety of goals to be accomplished.

As with all wars, the conflict has garnered thousands of refugees, flooding from their countries to Europe, neighboring countries, and the Middle East.  This has created further turmoil; with the increasing number of terrorist attacks and the continuing struggle against ISIS, many countries have refused to accept any new refugees from Syria.

The United States now questions whether it should continue to accept the refugees.  Only about 1,500 refugees have entered the country since 2011.  Previously this year, the U.S. offered to give legal status to at least 10,000 new refugees, but in light of the terrorist attacks in Paris, many states have reconsidered.  As of now, 31 governors have declared Syrian refuges unwelcome in their respective states.  These states, which include Georgia, protest their admission, claiming that allowing these refugees into the country endangers U.S. citizens.

Some may question these states’ right to take such action, but regardless, over half of the country is fighting to keep these refugees out.  The conflict has taken over news stations and social media, raising much debate about whether it is just to deny these people entrance into our country only because of their nationality.  Other options are being considered, but ultimately, the federal government will have the final say in what happens.  Until then, Syrian refugees will have to wait until the war ends or they have found a new place to call home.