New Sports in the 2016 Summer Olympics 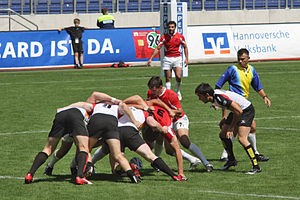 This is a picture of a group involved in a “scrum” in rugby sevens. The picture comes from this article about the sport.

This year the Summer Olympics is making its triumphant return in Rio De Janiero with 28 sports and 38 disciplines in total. As of right now, the “new” sports that are appearing in Rio are golf, returning from a 112-year hiatus, and rugby sevens making its first ever appearance in the games. Among the returning sports that will continue their legacies in Rio are canoeing, basketball, windsurfing, and swimming.

In June 2009, the International Olympic Committee (IOC) announced that there were two open slots in the 2016 Olympic Games. Hearing this call, seven sports contended for the spot including squash, karate, golf, roller sports, baseball, rugby, and softball. The committee voted to allow rugby sevens which removed the chance for baseball, roller sports, and squash and golf was selected later by a majority vote.

Golf last appeared in the 1904 Olympics in St. Louis, Missouri, which was only the second time it had been featured in the games. It fell out of the rotation of sports because it failed to captivate and was poorly organized. It was voted out of the optional sports roster in 1921, but was reconsidered in 2009 and placed back into the 2016 games.

Rugby sevens is technically the only new sport to make an appearance. Rugby has been featured before, its last appearance being in the 1924 Olympics in Paris, but was formatted with fifteen people per side. Rugby sevens sees only seven people per side, but the rules are the same as rugby fifteens. Rugby sevens, or VIIs, is played in two ten minute halves and will have two activities in the upcoming Olympics.

These new sports round out what is sure to be a very exciting competition in Rio. Golf will make its triumphant return, and rugby sevens will make its shining debut in grand fashion when the 2016 Summer Olympics premiere in Brazil on August 5, 2016.