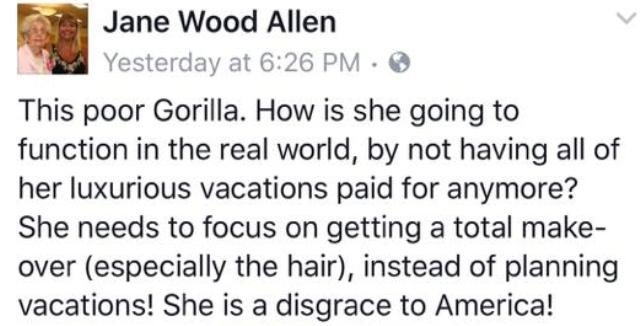 A screenshot of Jane Wood Allen’s original post in which she directed racially charged insults at First Lady, Michelle Obama, is shown above. Photo credited to Georgia Newsday.

As of Monday, Oct. 3, Jane Wood Allen, a teacher aide in Forsyth Country, was fired from Chestatee Elementary School for racist comments directed towards Michelle Obama posted on Facebook.

Allen’s most controversial post called First Lady, Michelle Obama, a “gorilla”, a word with historical connotations as a racially charged insult, and a “disgrace to America”. The post, made on Sept. 29, had hundreds of “shares” on Facebook in only hours and a thousand by the next day.  After the racist comment made by an elementary school employee transcended across different social networking sites, including Twitter, people angry by the comments scrolled through other posts on Allen’s Facebook wall. Allen apparently had a history of making racist claims towards African-Americans and Hispanic people, as well as Islamophobic remarks.

Hundreds of people protested Allen’s employment in an elementary school system through social media. Most of the claims against Allen remarked how unethical her opinions were, how inappropriate it was that they were made publicly, and how those opinions could potentially be inflicted upon her students.

The Forsyth County district made a public statement regarding the issue, saying that racism and discrimination are not tolerated in the entirety of the school district. The district provided no other statement, but Allen has been terminated from her duty in the elementary school.