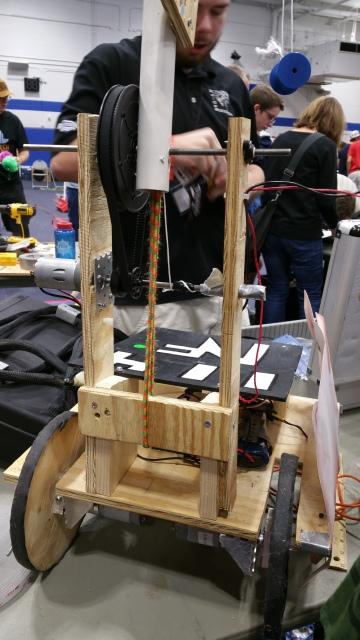 In this image, Noah Davis, makes a few final touches to the robot at the competition. The team’s robot is meant to harvest corn with their arm design.

The North Forsyth High School Robotics team recently competed at the Georgia BEST robotics competition. The BEST robotics competition is an annual competition that happens in the fall, and the North robotics team is always ready to compete. Each competition is based on a game that relates to a real world problem. The 2016-2017 BEST robotics game is called Bet the Farm, which is based on the reality of robotics and engineering being heavily incorporated into the agriculture industry today. In the game, four robots (four teams) on their own fields are meant to harvest and irrigate crops by moving scoring objects in a farm like simulation, as actual agricultural robots would in a real life scenario. The participants are meant to design and create a robot which can be driven by a single driver to perform in Bet the Farm.

North’s team performed with skill and agility with their simplistic, yet elegant design of their robot. The team rotated amongst five drivers each round: Noah Davis, Eric Laurin, Radhika Raja, Micah Davis and Logan Swafford. During their seven qualification rounds, the team held a steady rank at fifth place out of the 14 teams which attended and competed at the event. Their strategy of scoring, skilled driving and robot’s efficiency pushed the team through quarter – and semi-finals. However, the team fell short in the semi-finals match, when all three opponents outscored North’s robot. The robotics team’s consistent scoring wasn’t enough to pull themselves into the finals match.

Despite their loss, the team does not feel they did poorly. Senior Radhika Raja says, “I think we did our best and we made it to semifinals, which is farther than we made it last year, so I’m proud.” Freshman Angel Mercado says, “We did good, and it was exciting to see a competition on such a large scale for the first time.”

The team hopes to be able to win an award and place at next year’s competition and is hopeful they can.