Playlist: The Leaves Are Changing 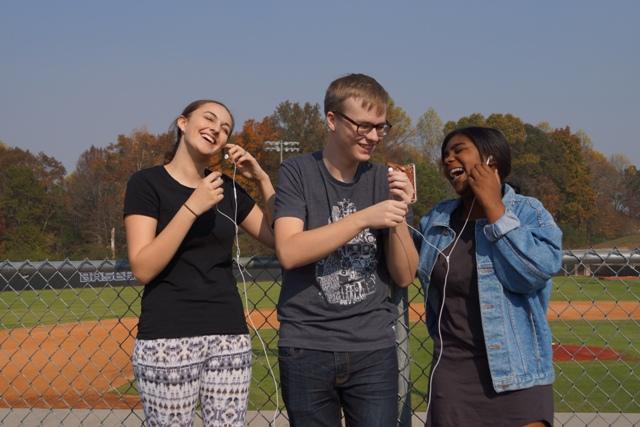 Junior Noah Smith and freshmen Melina Vergilis and Anna Anglin check out some fall tracks together by the football field. When fall comes around, calmer song choices come with it. Here are some songs to listen to with a big cup of coffee and a ton of Netflix to watch.

The temperatures have only recently settled into normal frigid November ranges, but one thing is cool throughout the year – music. As summer very slowly fades into autumn, song style choices seem to shift as well. Music is seasonal; the warm weather trend of upbeat pop music is slipping off of playlists while more acoustic and soft songs are sliding into their places. For music lovers searching for songs to listen to when it is noon on a cold Saturday and there is nothing to do but relax and drink coffee, here is a list of songs that are sure to summon that same feeling one gets when they finally see the leaves start to change.

Really, this whole album, “Modern Vampires of the City,” could find a place on any fall playlist. However, “Obvious Bicycle” specifically snakes its way into my music library each September without fail. The soft percussion coupled with frontman Ezra Koenig’s smooth vocals is perfect for cold early mornings and oversized sweaters.

“Black Coffee in Bed” by Squeeze

The title is enough to attract attention from those seeking songs to listen to while drinking coffee in bed, but this 80s British hit in itself is altogether fitting for any autumn scenario. “Black Coffee in Bed” was one of the less popular tracks from Squeeze’s “Singles – 45’s and Under” compilation album, but like fine wine, it seems to have gotten better with age.

“Taxi Cab” by Twenty One Pilots

While Twenty One Pilots has only just peaked in popularity this year, some of their best songs go back to their self-titled album from 2009. One such song is “Taxi Cab,” pairing Tyler Joseph’s metaphorical lyrics with constant piano and calming vocals. This is the perfect track for a cold-weather morning alarm.

Listening to this song in warm weather only seems to trigger memories of the time Plain White T’s guest starred on a 2007 episode of “iCarly,” but playing “Boomerang” as November weather sets in allows the listener to really appreciate it for the soothing and upbeat song that it is. Thoughtful lyrics and clear percussion come together to create something beautiful to sip coffee to.

“Starting Over” by Macklemore & Ryan Lewis

Despite the anger and passion revealed in Ben Haggerty’s lyrics addressing his struggles with drug addiction, “Starting Over” is a moving and comforting track about new beginnings. As leaves fall, this track is a good reminder that each ending is simply the start of something entirely new.

“That Green Gentleman” by Panic! at the Disco

“That Green Gentleman” comes from Panic! at the Disco’s 2008 sophomore album “Pretty. Odd.” noted for its lack of similarity to any of their other releases. This track fits the album’s overall theme of relaxed acoustic styles, describing what a true journey it is to learn to accept change, be it life or simply seasons.

The constant guitar chord progression of “Dead Sea,” accompanied by little else, makes the rather depressing overall sound of this track into something lovely. If the appearance of red and orange leaves had a sound, it would be The Lumineers frontman Wesley Schultz’ vocals.

“One Night in October” – Little Comets

This song stands out from others on this playlist because of its upbeat rhythm and guitar riffs, but the title is pretty self-explanatory: it is about October. On a deeper level, the lyrics describe a dysfunctional relationship with priorities in disarray and feelings misunderstood. Though October has come and gone, “One Night in October” will stick to playlists at least until January.

Part of me is still bitter that no one in the world seems to appreciate Imagine Dragons’ sophomore album “Smoke and Mirrors” to the extent that it deserves. This track in particular uses falling leaves as a recurring metaphor for change and entering something new.

With most relaxed tracks, repetition is key, and “Sedona” fits that with a simplistic rhythm and calm percussion. Its colorful descriptions of the Arizona landscape makes listening to this an experience that feels like falling asleep; peaceful, satisfying and comforting.

One of the most bittersweet parts of the fall season is that October and November are particularly grueling with projects and assignments full of stress. This song is a reminder that when you fall, you get back up.

“Another Story (Feel So Low)” by Boxing at the Zoo

This playlist comes to its close with a song by perhaps the least-known group I’ve ever listened to: Boxing at the Zoo. The band has 553 followers on Twitter and 87,202 monthly Spotify listeners (compare to Coldplay’s 25,328,798). “Another Story” describes insignificance and differences of perspective with soft instrumentals and steady vocals.

This link will take you straight to the playlist in its entirety (plus several more bonus tracks) on Spotify. Check it out while the leaves are changing.