The Island Was Abandoned For A Reason 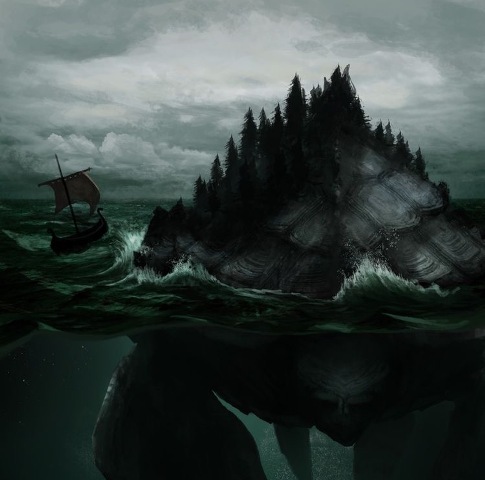 “A loud snap came from seemingly nowhere in particular and faded to an echo.” Art by the-big-foot on Tumblr.

The storm threw the ship violently back and forth. The pirates were in a frenzy, scrambling around like mice chased by a cat. After he retched over the port, one of the men noticed a distant island and pointed at it, shouting over the din of the storm to the rest of his crew. They clustered at the end of their ship in an attempt to see it better.

Their progress was slowed by the merciless storm, but they managed to navigate the boat through the rocky waves eventually. It took them hours to arrive at the small island, which seemed to be abandoned. Once the tattered ship slowly came to a stop, the pirates piled out and made for cover, seeking protection from the thunder and rain. They were too far away to notice their ship being pulled back out to sea.

The rain started to quiet down while they explored the sandy bank, and the group became louder and more confident as they headed toward a forest past the beach. After a while of searching for a safe place to rest, they stopped under the protection of lofty trees to gather themselves.

The pirates sat cross-legged and ate and drank from the small amount of provisions that they had left. One of them tentatively asked, “Captain, what’re we going to do next?” The captain was a tall, burly man whose face was almost fully covered by a beard and a mustache. All eyes were riveted on him.

“We need to rest first,” he said gruffly. “We couldn’t’ve repaired the ship when we landed, and we can’t now either. Later we’ll find food and water to sustain long enough for us to make repairs to our ship.” The crew nodded. “Explore tomorrow. Let’s sleep now.”

Everybody tried to find the comfiest rock and patch of ground that they could lie on. They attempted to fall asleep in the 30 minutes that followed, yet they couldn’t help but toss and stir. At last, one of the pirates, a mousy man, abruptly jumped up.

“I wanna go explore since I can’t fall asleep,” he said matter of factly. The captain grunted in response. Another pirate joined him after a moment’s hesitation, and they left the camp.

The pair walked until they came to a break in the trees. Past it was the beach and the ocean, but it was not the same side of the island that they started at.

Suddenly, they heard a sharp crack. Wide-eyed, the pirates looked at each other, nodded, then slowly started forward to investigate.

They bent over to look at the waves. They stirred quietly for a moment, then a black and blue tentacle shot out of the water towards them. It wrapped around one of the pirates with lightning speed. He screamed, then he was pulled under the water as quickly as the tentacle appeared. The other pirate fell backwards, but he didn’t have time to move one more step before he was snatched too.

Meanwhile, patience was getting tested back at the camp. “Where did those scallywaggers run off to?” An old pirate scowled. “They should have been back hours ago.”

Another pirate responded, “Think we should go look for them?” They all started to stand, but they were cut off by a loud cough from the captain.

“Just be careful,” He said shortly, eyeing them.  Then they were off.

The group went in the same direction as the pirates before. Nearly 20 minutes passed before something happened: a loud snap came from seemingly nowhere in particular and faded to an echo.

They stopped in their tracks and spun around, trying to find the source of the noise. It resonated again, and this time it came from underneath them. It sounded as if the ground itself was rumbling.

A crack appeared in the forest floor, right through the group of pirates. Next, the ground split apart, revealing rows of sharp teeth. All of the pirates screamed bloody murder; then they were swallowed alive by the kraken inhabiting the island. Sadly, they had failed to notice the five other wrecked ships by the shore when they first arrived.