An Inside Look into the Life of a Student Athlete 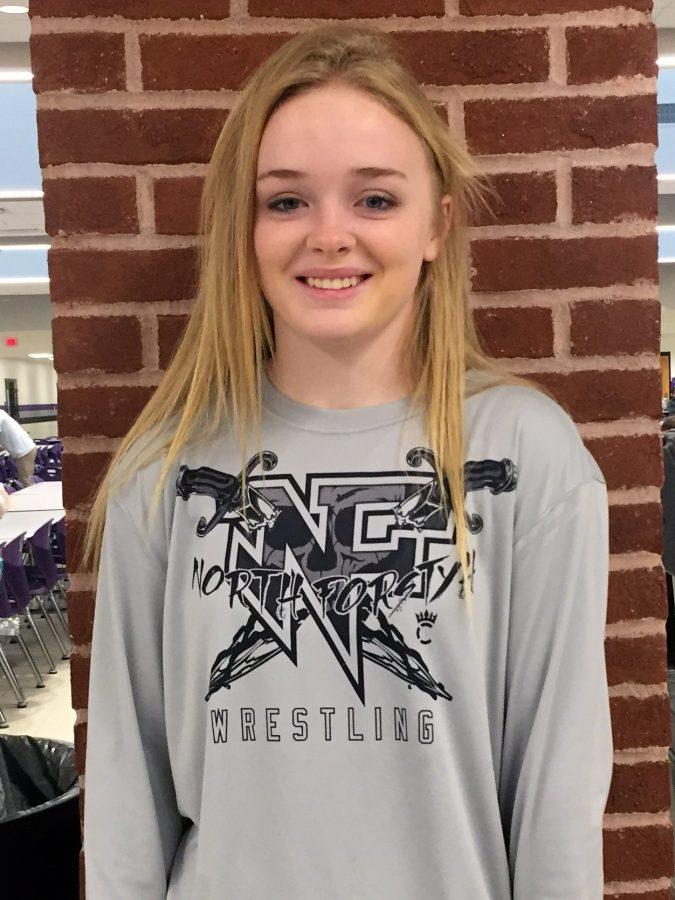 Sophia Eglian is sporting her wrestling shirt. All of the athletes of North Forsyth work hard every day in and out of playing season to help our sports teams be the best in the county.

North Forsyth High School offers many different types of sports programs for students to partake in, just some of which include football, soccer, swimming, wrestling, cheerleading and more. Most spectators, however, only pay attention to the games or competitions that the athletes are in, and they do not stop to think about how much time and effort student athletes put into achieving their goals or winning a game. Many of these sports call for hours upon hours of practice and conditioning each week. In an attempt to discover what being a Raider athlete is really all about, five students were interviewed, and they revealed what it is like to be proudly wearing a North Forsyth uniform.

Kylie Palak is a freshman this year and is part of the basketball cheerleading squad. She has been participating in school cheer for two years, as she did it in middle school too. She has practice twice per week for an hour and a half at a time, and she describes them as “fun because [she] is with all of [her] friends and it’s just like [she] is hanging out.” Her and her teammates are very close because they spend so much time together learning stunts and routines, so they can cheer the basketball team to victory. A game day for Palak is exciting because she “loves wearing [her] cheer shirt and showing everyone [she] is a part of something.” Sometimes, it understandably can become difficult for her to juggle practices with assignments, tests and projects, but she feels like she gets the job done. Overall, Kylie loves basketball cheer and would never trade in her Raider uniform for anything.

Madison Hamel is a first year member of the NFHS swim and dive team as a freshman, but she has been swimming for five years. Individually, she has placed in the top 10 swimmers at a meet three times this year. Her favorite thing about being a Raider athlete is being able to show of her and her team’s talents and proudly representing North. Hamel enjoys practices because she feels like “waking up and getting [her] day started with practice makes [her] feel better for the rest of the day.” She loves her team like family because of the amount of time they spend together. She knows her swim team is always going to be there for her no matter what. Unfortunately, due to the load of school work and practicing, Hamel had to quit year-round swimming, so she only swims in the mornings. Even through early mornings for practice, Madison loves being a member of the NFHS swim and dive team.

Sophia Eglian is wrestling for North for the first time this year as a freshman, but she has been wrestling since she was in fourth grade. Eglian is a two-time state champion in both Alabama and Georgia, as well as some other incredible feats in various different states around the U.S. Wrestling for North means being able to have a family to have her back through everything. Every day after school, the team has practice from four o’clock to six o’clock. Because of this the members have plenty of bonding time. Sophia believes that game days are the best. She loves to use the moves that she learned every day in practice on the mat to eventually win against her opponent. Eglian and the rest of her teammates have one thing in common for sure: they all want to become the best team in the state! In Eglian’s words, “I love the sport. It has helped me to focus on my goals, build my character and be a better athlete.”

Hayden Whittington, a freshman, is also on the NFHS swim and dive team for the first time this year and saying that she loves it would be a major understatement. She has been swimming for a total of four years now, and so far this season her greatest accomplishment was coming in first place for her 100 backstroke. For her, the proudest moment as a raider athlete was when Hayden and her relay team finished in second place at a meet not too long ago. They practice for events just like that one each Monday through Thursday, and Whittington and the team are in the pool starting as early as six in the morning. They practice for hours almost every day for meets that Hayden would describe as “nerve-racking but overall always a fun experience.” She is very close to her teammates, stating that they “get along well together and are able to work together as a team.” Being a member of the NFHS swim and dive team remains very important to Whittington, but she also balances schoolwork on top of it. “School and sports can be hard to manage, but as long as you stay on top of your school work and it’s your main priority, sports and swimming work out just fine,” Whittington explained. It is safe to say that swim is a fun sport to take part in for Hayden!

All of the athletes of North Forsyth work hard every day in and out of playing season to help our sports teams be the best in the county. Through hours of practice, early mornings and game days, our athletes continue to impress us and represent North well with each and every win.