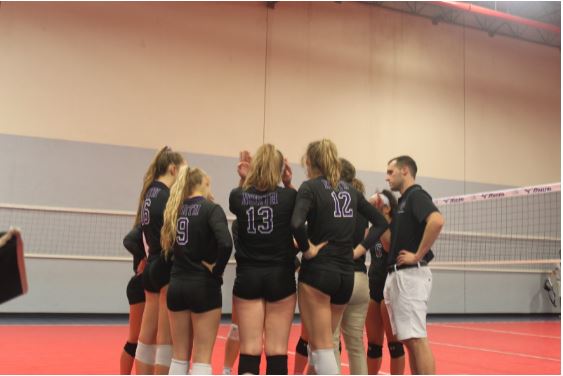 Team huddle during game against Lassiter

The stars of Saturday’s tournament were line senior Mary Ellen Enright, who according to Coach Kelly Cecil, “really stood out and stepped up for us; she played fearless all day and really set the tone,” and sophomore Kate Perryman, who “was a force defensively in the front row with some crucial blocks.”

The tournament began with three “pool play” games, where teams were divided into three pools of four teams each. In the pool play round, the Lady Raiders breezed through the first two games, beating Sprayberry High School 2-0 and Sonoraville High School 2-0.

The team was presented with a challenge in the third game of the pool play round as they faced Lassiter High School, which was ranked number two in the 7A division. The girls put up a tough fight in the fast-paced game. Lassiter took the lead early on, but a superb serving performance by No. 1, junior Anna Grace Cheatham in the first half helped bridge the score gap. Between serves by Cheatham and blocks by Kate Perryman, No. 12, Lassiter was kept on their toes the whole game, regardless of the score.

Coach Cecil described the tournament as “a great way to get pushed before heading into a big week of region play vs. Lambert on Tuesday,” and Perryman said about the tournament, “I think we all played really hard and it was definitely one of our better days!”

The team as a whole gave a dynamic and exciting performance, and the rest of the Varsity Lady Raiders’ 2018 season is bound to be an exciting one.