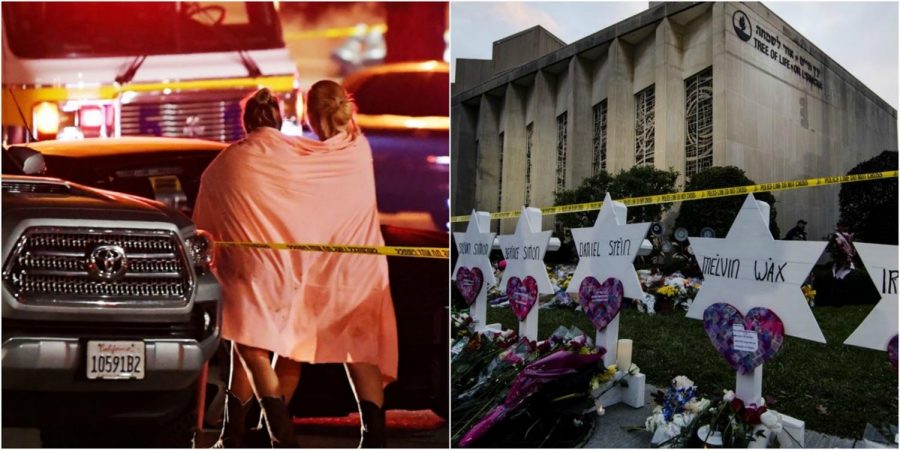 Both pictures display the mourning and shock caused by the two shootings that took place in the United States. (Photo Credits: (left) Mark J from the website The Cut. (Right) Matt Rourke from WTMV website.)

On the morning of Oct. 27, Robert Bowers walked into the Tree of Life synagogue, located in Pittsburgh, Pennsylvania and opened fire on worshippers within the building, killing 11 people. Ten days later, on the other side of the country, 12 others died at the hand of Ian Long at Borderline Bar and Grill during the bar’s College Night.

The rise in mass shootings has caused some to question why this keeps happening to the land of the free. While this seemingly simple question may have no obvious answer at the moment, but there are similarities between the synagogue shooting in Pittsburgh, Pennsylvania and the shooting in Thousand Oaks, California. It is necessary to identify and examine these comparisons in order to understand why tragedies such as these continue to happen in America.

What Are the Differences Between the Two Shootings?

Reasons for Shooters Actions – The actions performed by the shooters are nowhere near acceptable, but there are reasons and beliefs both shooters had to carry out their own shooting. Bowers, who was responsible for the attack at  the Tree of Life synagogue, was very anti-semitic, discrimination or hostility towards Jews. He believed that Jews were assisting migrant caravans from violent countries to the United States. In the case of the shooting in California, however, it seems to have been a mindless act. Minutes before his attack, Long posted a message on Facebook, saying, “It’s too bad I won’t get to see all the illogical and pathetic reasons people will put in my mouth as to why I did it. Fact is I had no reason to do it, and I just thought… life is boring so why not?” No answers will be found for the victims’ suffering families because Long shot himself, contributing his own death to the number of casualties in THousand Oaks, California.

What Are the Similarities Between the Two Shootings?

General Area and Events – Both of these disasters occurred in locations where large amounts of people were gathered  for times of social interaction and community. For the attendants of the Tree of Life synagogue, this time was a weekly assembly to worship and pray in peace, but that peace was interrupted by Bowers the morning of October 27. Worshippers attempted to hide from Bowers, but some sill died while praising their God in their place of worship. At the Borderline Bar and Grill, it was College Night. The bar was filled with 18 to 20-year-olds looking for a good time. Instead they were met with the kind of catastrophe that most people only hear about on the news. When the first gunshot went off, people thought it was just a balloon popping. They soon came to realize what was actually happening and either ran or hid.

Shooters’ Actions and Decisions –  Both shooters were very comfortable with guns. Long, a Marine Corps veteran, legally owned his own firearms and used smoke bombs to confuse those who were participating in College Night at the bar. “He knew what he was doing. He had perfect form,” Teylor Whittler, a young woman inside of the bar, explained to the New York Times. Bowers also legally owned his firearms. In fact, he posted a photo of his “Glock family” on a social media platform, displaying an arrangement of three different Glocks (hand held gun).  In addition, both of the attackers opened fire on the crowds, resulting in double digit death tolls.

First Responders – First responders immediately dove into action to save the victims of the communities they served. Police and SWAT officers were dispatched within a minute of the first 911 distress call to the Pittsburgh synagogue. VCSD, the Ventura County Sheriff’s Department, arrived no later than three minutes after the first gunshot at the bar in California. In both circumstances, first responders were injured. At the Tree of Life Synagogue, four were injured–two police officers and two SWAT officers. all four of them are still alive and well. However, in California,  first responder Sgt. Ron Helus suffered from an injury and died in the hospital. He ran into the chaos of the shooting while others ran out, and for that Californians and others around the country are eternally grateful.

Shooters’ Social Media – In both tragedies, each gunman uploaded social media posts, one on Gab and the other on Facebook. Bowers posted a video of himself saying, “I can’t sit by and watch my people get slaughtered. Screw your optics, I’m going in,” on Gab, and five minutes later a 911 distress call was made from the Tree of Life Synagogue. Long also used a social media platform before his attack in California. On Facebook, Long posted, “The only thing you do after these shootings is ‘hopes and prayers’ … ‘keep you in my thoughts’ … every time… and wonder why these keep happening.”

Higher Demand for Gun Control – After multiple mass shootings, including the Tree of Life synagogue and Borderline Bar and Grill attacks, Some politicians are promising action in Congress regarding gun control. “The American people deserve real action to end the daily epidemic of gun violence that is stealing the lives of our children on campuses, in places of worship and on our streets,” stated Democrat leader Nancy Pelosi. Pelosi explained that the actions needed to stop gun violence would include  placing restrictions on high-capacity magazines and allowing a temporary removal of firearms from people with concerning backgrounds.

When comparing  these shootings, we can identify some simple aspects that are true of nearly every mass shooting that has occured in the United States. This rise in mass shootings is devastating, and although we can research these events, we can never truly understand why they happen. North Forsyth High School sends all of their love to the suffering families of the victims and thanks first responders for being brave enough to rush in while other rushed out.