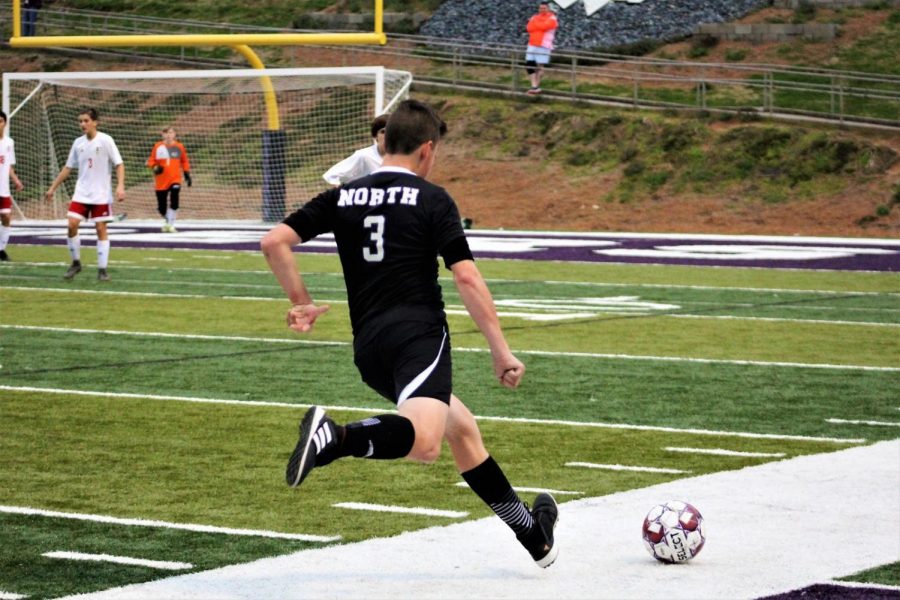 No. 3, freshman Brayden Martin, preparing to attempt and score for his team.

Though North lost against Central, they did not go down without a fight.  In the first half of the game, Central quickly scored a goal, filling the audience with excitement and encouraging  North to play harder. Later, freshman Dylan Sanfilippo scored a goal for North, tying up the score. North’s JV Boys, brimming with enthusiasm, celebrated and hugged Sanfilippo, having gained a sense of hope.

The second half of the game began as any normal game would: players fighting for possession over the ball, making passes and running, lots and lots of running. However as it progressed, North’s team began to play with more intensity and rigor. Freshman Justin Askew was running up and down the field, making sure he was there for his team every single moment of the game. At one point the JV soccer coach, Robert Bell, took Askew out of the game, saying, “You can go back in whenever you’re ready. I just wanted to give you a break from being Superman out there.” North’s keeper, freshman Ean Hall, played extremely well; he was ready for almost anything and very quick on his feet. Another player kicked Hall in the knee, but he continued to play anyway, showing his dedication to the sport and his team.

Though the game had ended, there were still interesting events to take place. Once everyone had gone home, the coach of the opposing team talked with Askew and told him, “You guys were amazing. You should have won this match,” implying the skill of the JV team and Central’s sportsmanlike manner.

Even though North’s JV Boys did not win this game, they showed their ability to come out as the victors. There is no doubt that if the team works on these two key elements, they will come out of their next game as winners.