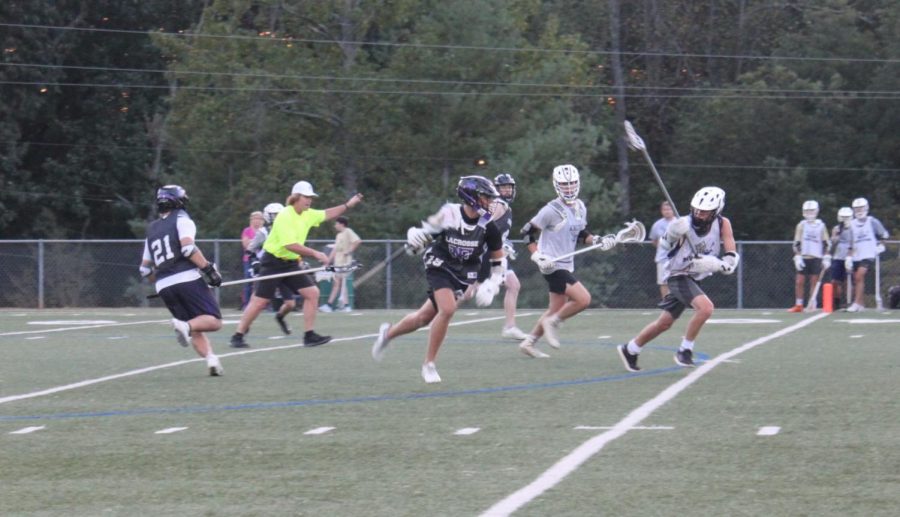 North face-off player was able to gain possession of the ball. Cradling it close to keep from the opponent checking his stick. Photo by: Jen Vincent

The North Forsyth High School boy’s lacrosse season is starting up once again with their latest scrimmage against River Ridge at Bennett Park on Oct. 8.

Although they lost their scrimmage, the Raiders came very close to beating the opposing team 8-9. It was a tough scrimmage, however senior attack player Chris Smith #16 said “The mistakes we made we just the first game mistakes everyone makes.”

In the first quarter River Ridge was able to gain possession of the ball scoring their first goal of the game. However, on their second attempt Goalie #22 Nate Gaudio made an incredible save, saving the team another point. Meanwhile down on the other side of the field attack player #16 Chris Smith scored two points within the third-quarter. Unfortunately River Ridge was able to maintain their lead.

The Fall season is all about getting the team ready for their  spring season. Coach Sopko said, “I thought [the scrimmage] went well, it’s our first test of playing another opponent. And today’s our first day we can really put in under the microscope and see what we need to work on.”

As for the spring season, Lacrosse players already have their goal set. To score goals, to get to the playoffs, to have a winning record, and to play as a team.

The lacrosse team lost 12 graduated seniors this year. As a result, it is important for the team to show the new players the atmosphere of the team. “[build] an identity, [build] a culture, [and show] what it means to be a North Forsyth lacrosse team and having a good attitude and building a brotherhood that you want to be apart of and get people excited about this program.” Coach Sopko expressed.