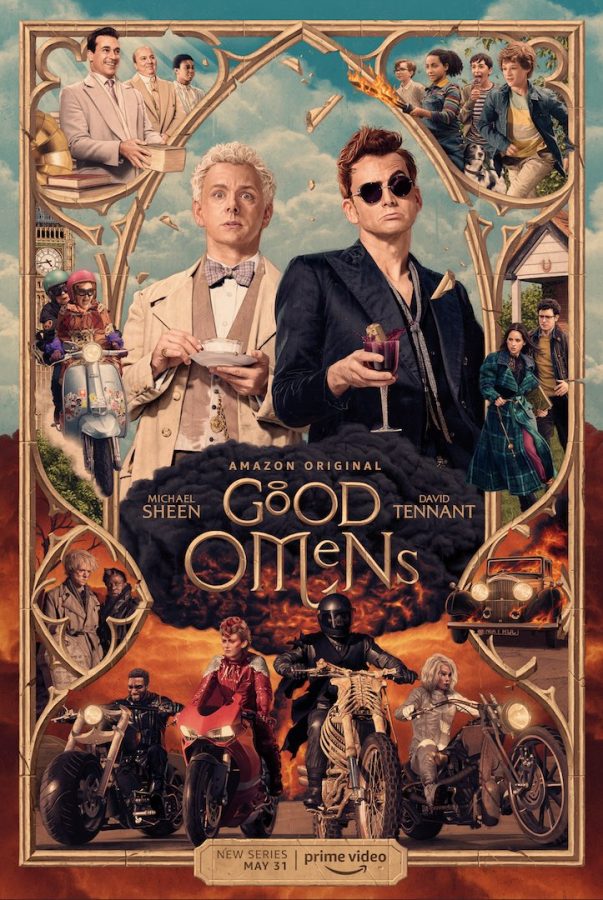 The Good Omens TV poster with all characters and important details.

The “Good Omens” book came out over 20 years ago and the show came out in May of 2019. Naturally, people began comparing the two. There are some very different elements to the book compared to the show from character design to forgetting characters altogether.

“Good Omens” surrounds six different storylines that are all connected by one person, Adam Young. He is the Antichrist. Crowley, the demon and Aziraphale, the angel are trying to stop Young from ending the world while Archangel Gabriel and Beelzebub are trying to get Adam end the world. Working against them is Anathema Device who is a witch following prophecies to help save the world. Newt Pulsifer finds Device and helps her after Sargent Shadwell and Madam Tracy send him out to find a witch.

Adam Young and his friends Pepper, Wensleydale and Brian are none the wiser of everything happening around them because Adam does not know who he really is. But Crowley and Aziraphale lose Young, so everyone goes on a wild goose chase to find this 12-year-old kid who is going to end the world in a week.

One of the major differences in the TV show is the character design. Crowley, played by David Tennant, is pictured with fiery red hair, which changes in between time periods. For example, in the Garden of Eden, he had long hair, and a bowl cut in the 60s. In the book, he was simply described as having the same dark hair throughout the story.

Another difference is the history between Crowley and Aziraphale. They had been friends for over 6000 years from the Garden of Eden to present times. At the beginning of episode three titled ‘Hard Times,’ it goes through all the generations and centuries they have been together, making it the longest cold open in TV history. The cold open goes on for 28 minutes out of the 57 minute run time. Their relationship was only alluded to in the books, but there was never full explanation given until the show expanded on it.

Some of the antagonists in the series are the horsemen of the apocalypse, the angels and the demons. In the book, they talked about more than just the four horsemen, but they never appear in the final cut of the show. Same goes for the Archangel Gabriel, played by Jon Hamm. He is only mentioned a few times in the book, but he plays a huge role in the TV adaptation by being a driving force for Aziraphale who is played by Michael Sheen. Gabriel is trying to make sure Adam Young ends the world as planned by God in an ‘Ineffable plan’.

Freshman Karlyn Wallis, who has read the book and seen the show, says that she prefers the show over the book because of the humor and it is easier to understand. She thought,  “Crowley and Aziraphale have stronger morals [in the show] they aren’t just holy creatures, they make mistakes and have their own agendas, more human I guess.”

In the end, I think the show is better simply because it expands more on the story than in the book. Even little differences like backstory make a big difference in telling the story; however, both are amazing and I highly recommend both of them.