Behind the Curtain Of Pac The Pack 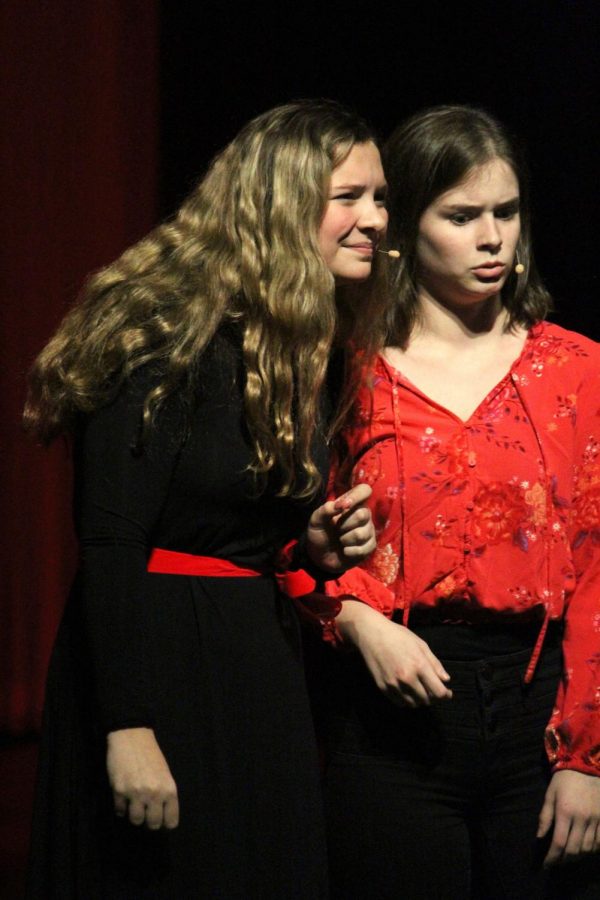 (Photo By: Sydney Jarrard). Harley Ansbro and Jen Vincent’s performance of Anything you can do from Annie get your gun. We never got to find out who was better, but the performance was amazing.

North’s drama department brought something new this year with a student talent showcase called Pack the Pac, where any student can audition and show off their talent for free. This showcase took place at North Forsyth High School’s performing arts center on November 14, at 8 p.m.

This idea was brought to life by Senior Ireland Ashburn. She is a member of the triple threat class and historian of the thespian troupe 5368. She said “Last year I noticed that our audience was mainly parents and theater kids. Our theater department works really hard to put on amazing productions that we want an audience to see! Our school has many different clubs and activities that many people don’t know about, including theater. Some people don’t even know where the hallway by the marketing room goes or what the PAC looks like. Because of this, I wanted to do something to encourage students to come out and see the different talent our school had to offer. However, I know how students work and it can be hard to motivate them. By involving many different clubs and activities we were able to encourage people who don’t normally come to the PAC to watch their friends perform, some clubs even gave hours for going to Pack the PAC! My hope for this show was to reach a different audience and bring more students to see what amazing work is done in the theater!”

Behind the curtain, the performers had their own opinions on Pack the PAC. Freshman Ashlynn Dickerson performed “Impressions on Red.” “It gives people practice for performing in front of an audience.”  Sophomore Harley Ansbro performed “Anything You Can Do” from Annie Get Your Gun. She said, “Pack the PAC was open to everyone. It gave everyone a chance to try out and show off their talent. And also to experience what it’s like to be in the theater and to be on stage.”

On the tech side of things, Stage Manager and Senior Abby Wilson said, “Getting all of the scene transitions down was probably the hardest part of Pack the PAC. Because there was an awful lot of grand openings and closings and getting all the timing right.” Senior Natalie Cardona had the job of sound and mic coordinator. She said, “I think the most challenging part was working with the one rehearsal we had, it was very fast-paced and different from what we’ve done in the past. So we had to prepare in a small amount of time.”

Pack the Pack didn’t just give performers a chance to show off their talents. It also impacted the audience members. Freshman Sophie Jerry said, “I really enjoyed Pack the PAC. Not only was every person who went on stage insanely talented. But even in the audience you could sense this like raw passion for theater and singing and performing. It was really special to see a showcase where every single person on stage wanted to be there, and wanted to perform.”