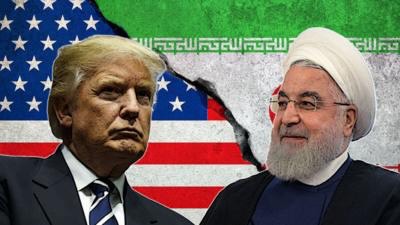 Donald Trump and Ayatollah Ali Khamenei addressed the public over the strikes and attacks in Iran. Photo by Getty Images.

On Jan. 3, President Donald Trump ordered an airstrike in Baghdad, killing General Qasem Soleimani who is in the Islamic Revolutionary Guard Corps and commander of its Quds Force the unit in charge of foreign operations that ran logistics, ideological guidance, and military affairs across the nation. The United States considered Soleimani and the Quds Force a “threat and terrorist organization,” which led to the airstrike.  After news spread of his death, supreme leader Ayatollah Ali Khamenei called for three days of mourning for the 62-year-old military leader.

From Tiktok videos to memes, the idea of World War Three has become a major topic in national news and social media apps. Panic and worry has spread to some individuals, as many joke about getting drafted for the “war” and how each generation will act in the field of battle. However, while most joke over the idea of war in 2020, some people are genuinely concerned about the possibility of another war, will citizens be sent to Iran for a possible world war, and what exactly is occurring in Iran?

Since Qasem Soleimani was considered the second most powerful leader in Iran, the Iranian government responded to the airstrike by attacking two United States housing bases in Iraq. However, in Trump’s address to the U.S., he revealed to the public that “no Americans were harmed in [the] attack by the Iranian Regime.” With the back-and-forth tensions between the Iranian and the United States government, will World War Three actually happen?

As of right now, the third world war will not occur. In Trump’s address to the people, he explains the reasoning behind his attack in Baghdad. He says that Soleimani was “personally responsible for some of the absolute worst atrocities” and he was responsible for “wounding and murdering thousands of U.S. troops.” However, Trump ends the speech by saying that he is “willing to embrace peace with all who seek it,” bouncing the ball back into Iran’s side of the court, anticipating how Iran will respond to Trump’s address.