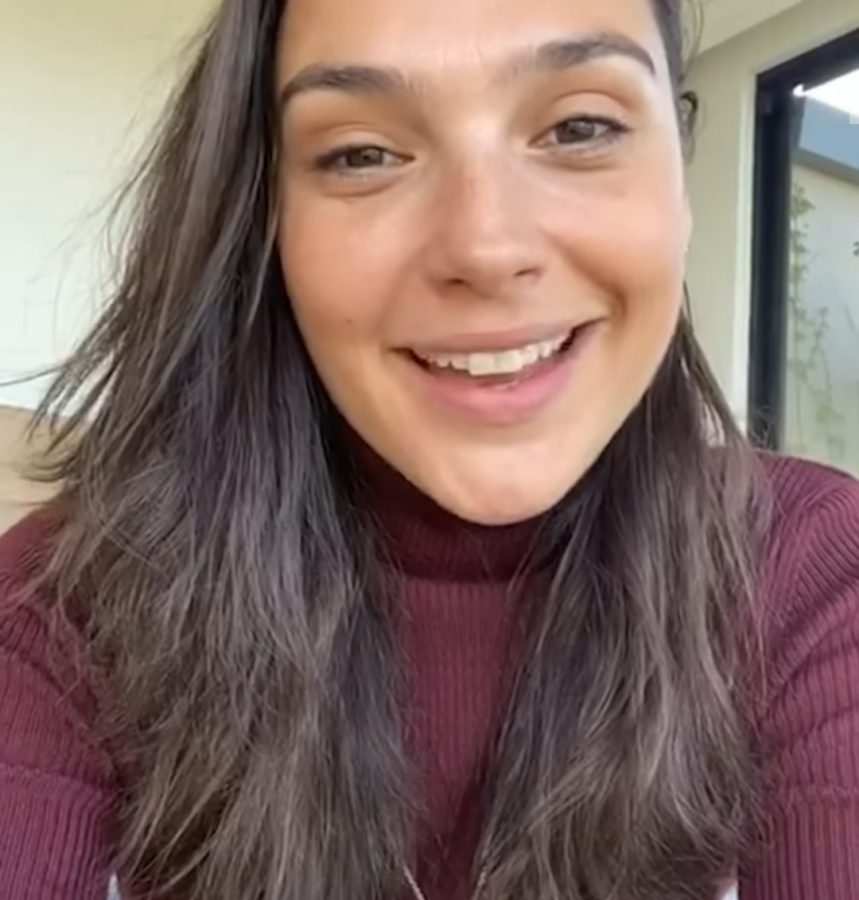 This is a picture from the famous video up for discussion today. Gal Gadot uploaded this to her Instagram, but not without receiving strong backlash from fans and critics alike. Photo By: Gal Gadot

Celebrities are NOT relatable. I know this may come as a shock to many of you, but yes, we do not live in a home worth millions of dollars. We have a budget, a stressful life, and families to take care of with few resources. I feel like most people reading this article are middle-class teenagers with parents who possess moderate job security. However, there are, sadly, many people in this country alone that are going through severe distress because of this virus.

There are people that are losing their jobs, people that are struggling to qualify for the unemployment benefits they deserve, and people that have to worry about the serious consequences of contracting COVID-19 because they have underlying health conditions with no healthcare. Apparently, celebrities are also suffering just like those people now. If you did not know, Gal Gadot posted a video on her Instagram where she said that she was feeling ‘philosophical.’ Oh boy. You know it is going to be good when the rich become ‘philosophical.’ Especially when they think they are in the same boat as everybody else after they have the one minor inconvenience of staying home.

Gadot claimed to be “inspired” by the viral video of a man who played trumpet on his balcony to calm his neighbors. She then said that “we are all in this together.” Yes, the virus has affected all of us in some way, and as I previously stated, I am lucky and secure enough to not have to worry too much. However, she is trying to group herself with all of the people that are struggling just to live through this. This is something that I am even cautious about.

Gadot then proceeded to sing the opening lyric to the song Imagine by John Lennon, and she asked her friends to join. Lennon is actually one of my favorite musicians (along with the rest of The Beatles), and Imagine is one of my favorite songs. I absolutely love it, but even I recognize that now is not the time to say “Imagine there’s no heaven… Above us, only sky” when people are dying all over the world. Not only that, but it’s incredibly ironic to have the famous sing it.

Lennon wrote this song to protest the Vietnam war. The entire point of the song is to promote peace, to have people give up their possessions, to help others out, and not do things just for personal gain (such as only doing the right thing just to get into heaven). Having celebrities sing “Imagine no possessions… A brotherhood of man” is… just irony at its finest.

As if that’s not bad enough, this was just inclusive to celebrities (not to mention all the clips edited together makes it horribly out of tune). There are no individuals that are actually suffering. It’s just Gadot and friends! One of the reasons why the man with the trumpet was so popular was because he was just a regular guy. He was a man of the people. He had good intentions and just wanted everyone in his area to come together to forget about the pandemic. He wasn’t the one who took the video.

Although Gadot may have had good intentions, I don’t think that she, deep down, just did this to help people to forget about the virus. All the ‘superstars’ seemed like they just wanted the attention on them. If they really wanted to help, they could have donated supplies to support people in need. They couldn’t even be bothered to donate a large amount for appearance. Tom Hanks donated his blood for research after he and his wife won against COVID-19, and he didn’t make a big deal about it.

The sad thing is, these celebrities really thought this might have helped people. They’re so self-absorbed that they believed everyone’s worries and fears could just be thrown away and be replaced with gratitude and affection towards them. It really is sad that they went to these lengths because they were attention deprived.

An excerpt from John Lennon’s Instant Karma (We All Shine On), “You better get yourself together darling / Join the human race… Who on earth d’you think you are? / A superstar? Well, right you are”.